Wanting to spread awareness and the meaning of the poppy, American Legion Auxiliary Unit 24 in Lake Geneva, Wisc., had a poppy sculpture created and placed near the local veterans memorial.

“The community just needs to be educated about those veterans who gave the ultimate sacrifice for us and our veterans need to be honored; they need to be recognized,” said ALA Unit 24 member Mary Schlehlein. 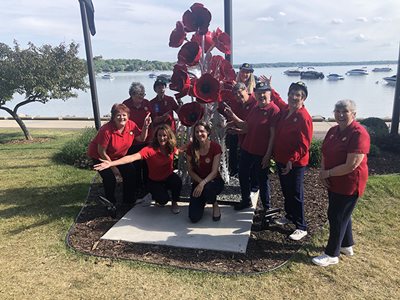 The project began when Schlehlein saw that something similar was done overseas and decided Wisconsin needed a symbolic poppy sculpture to honor our nation’s heroes. She pitched the idea to her fellow Unit 24 members, and everyone was on board to jump in and help where needed.

“I knew this would be a good project for us to work on and to dedicate to the city of Lake Geneva,” said Schlehlein. “Everyone was involved. It was a unit effort.”

Their first step was finding an artist. Luckily, John Larkin, an artist in the area, was more than willing to help. Larkin is a lifelong resident of Lake Geneva and ended up donating his labor to this project.

“He was very instrumental and a great guide for us. It was our lucky day when he said he’d be happy to take this on,” said Schlehlein. “He was very happy to do this for the veterans.”

Thankful for his donation, Unit 24 still needed money to buy metal and material for the sculpture. The unit began fundraising campaigns to help with finances. They sent mailings and invitations to all American Legion Family members in their town, all dignitaries, and local businesses. Schlehlein reached out to Lake Geneva’s local newspapers and television stations to help spread the word of the poppy sculpture project.

Unit 24 held a fundraiser at the local Culver’s to help raise money for the sculpture, and part of the proceeds went to the Auxiliary. They plan to continue fundraising throughout the year to take care of the cost.

After updating and meeting all of the city’s regulations, the sculpture was dedicated to the city of Lake Geneva in May during a small ceremony. The sculpture consists of 13 big, brilliant red poppy flowers made out of aluminum. The 13 poppies symbolize the stripes on the American flag. It is seven-and-a-half feet tall and is placed by the Lake Geneva lake in Library Park near the veterans memorial.

“It’s really beautiful because you look at the poppy sculpture and see this beautiful lake in the background,” said Schlehlein. “I couldn’t have asked for a better outcome. It’s just beautiful.”

A headstone will be placed in August of a poem about the poppy’s meaning. They will also have a bronze dedication plaque about never forgetting our nation’s veterans. It will be cemented on the side of the poppy sculpture that includes the date Unit 24 dedicated the sculpture and the unit number.

“The meaning of the poppy is so significant, everybody needs to know what it means,” added Schlehlein. “We just hope to educate everyone on the true story and true meaning of where the poppy originated and why it should be respected because it’s for our veterans.”