Veterans reflect on healing power of the arts

Veterans across the country show off their talents at local Veterans Creative Arts Festivals each year, hoping to earn a first-place spot to attend the national event. They hone their skills in categories such as dance, music, writing, art, and more.

The National Veterans Creative Arts Festival (NVCAF) welcomes new and returning veterans each year, with the week culminating in the art exhibit and stage show.

The NVCAF is co-presented by the American Legion Auxiliary and the U.S. Department of Veterans Affairs. The ALA has been involved since 2000.

Every veteran who attends the event has a story to share. Following are a few of those stories: 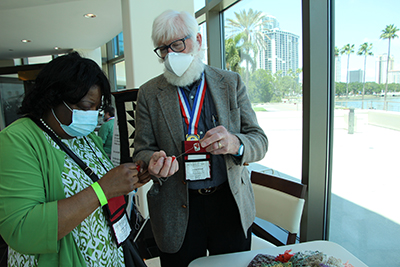 “I was really excited,” veteran James Nickel said when he found out he placed first for the fifth time and would get to attend the national Festival. “It’s exciting every year.”

Nickel is involved in the art of making knots, or tatting. He cautioned going to Google to look up tat or tatting because “you get a lot of tattoos,” he said, laughing.

It’s an ancient, dying art that not very many people know how to do anymore.

“The tatting part I got started in when I was going with [my wife] Diane,” he recalled. “Her grandmother was living with her, and she wanted to pass on the art of tatting to all of her granddaughters. Because I was going with Diane at the time, I had to sit in. We were all in the living room gathered around Grandma, and we were all doing our tatting. At the end of the day, Grandma and I were the only ones tatting. The girls could not get it.”

That was about 52 years ago, he added.

Once Nickel found out he was once again going to the Festival this year, he couldn’t wait.

“It’s really exciting to be back and see people because now you get a chance to see old friends and new people too,” he said. “I always think of it as it’s always a lot like when you first went into the service. You didn’t know anybody; eventually, you develop a friendship with everybody, and then every time you move, you have new friends. It’s the same as this. It’s always exciting to come back.”

Since he’s been to multiple Festival events, Nickel offers advice to veterans who have never entered a Festival at the local level.

“When I know someone is a veteran and they haven’t entered, I always try to convince them,” he said. “Try to do something. You may not think it’s great work, but you will be surprised at how great you really are. If nothing else, at least enter locally. It builds up your confidence in your work. You get a chance to improve, you get to talk to other people, and learn more from everyone.”

For Nickel, the therapeutic power of the arts has helped him.

“Especially the tatting, it helps me relax,” he said. “It also keeps my fingers moving. I have the onset of arthritis, and I have tremors in my right hand. It seems to help it an awful lot. It does have a lot of therapeutic benefits for it.”

During the local and national events, American Legion Auxiliary members play a big role in helping the events run smoothly.

“I want to thank the American Legion Auxiliary for everything they do,” Nickel said. “It’s just fantastic. I just enjoy everything that they do for us. On the local level and the national level —it’s just awesome!” 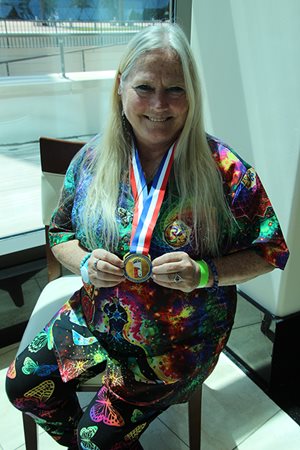 Malone-Verduin has won first place at the national level previously, but 2022 was the first year she attended the Festival in person.

This year, she entered as a performer with metamorphosis, a piece about a butterfly.

“I started out with the cocoon,” she said. “I bought an off-yellow, whiteish fitted sheet. I painted it with brown/tan stripes to make it look like the outer part of a cocoon. I wrapped it around me with my butterfly wings, and I just kind of wriggled my way out. I shook out my butterfly wings, they emerged, and I eventually flew to one side and the other, spreading my wings.”

The idea for metamorphosis came from Malone-Verduin’s personal experience of transforming from the military life to civilian life.

“It wasn’t an easy process,” she recalled. “The creative process really helps you to overcome those issues you may have had coming out of the military in a gentle way. The whole entire time in the military was not easy for me because I was the first person in my family to be in the military, so I had a hard time. The good times got me through the bad times.”

For her, metamorphosis was the perfect angle to express her feelings.

Malone-Verduin said she absolutely feels there is a healing power to the arts. Just talking about it brought her to tears.

Having experienced the Festival both locally and nationally, she feels events like these for veterans are definitely important.

“Every veteran should get the opportunity to do this,” she said. “I don’t know why I didn’t find out about these things until years later.”

For veterans thinking of entering the Festival at their local VA, Malone-Verduin said go for it.

“For me, it was the dance category that got me here,” she said. “That has always been a dream of mine — to own a dance studio and teach others to dance. Dancing gives me a mental and physical sense of well-being.” 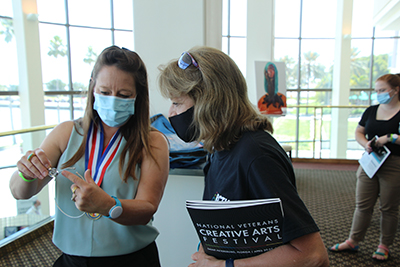 Veteran Julia Landecker was so surprised when she found out she had won first place in glasswork at the national level of competition that she thought it was a mistake.

It’s hard to answer how long it took Landecker to make the pendants because she probably made 50 in the process, with only the five she submitted for the Festival worth saving.

Landecker has been working with glass for quite a while, even joking that she “came out of the womb loving glass.”

“When I finished graduate school, I was really unhappy,” she recalled. “I had been working so hard, I hadn’t been producing anything artistically, and I was just miserable. I decided to go for stained glass. I had some exposure as a kid to stained glass. I always loved it.”

The rest is history for her.

“It’s been wonderful to make connections,” Landecker said. “It’s always good to get yourself re-inspired. I don’t know if this would change any of the direction of my art, but I think it will.”

Spending time around other veteran artists, she’s even thinking of possibly working on a collaboration piece with others.

With the artwork she does, Landecker feels it’s meditative.

“I do like to do a lot of dot work — it’s very precise and it’s very repetitive,” she said. “I like to experiment with the designs. The process itself is so technical and so precise, and my hands shake a little bit. You can’t be shaky when you are trying to land something in an exact spot that’s 1800 degrees.”

Overall, Landecker is grateful to have made it to her first national Festival and all the positive experiences that came with it.

“I just so deeply appreciate the work that went into supporting us,” she said. “It was an unreal experience. That’s why I’m already bucking for my place next year. I didn’t know what to expect, but I want to come back again.”