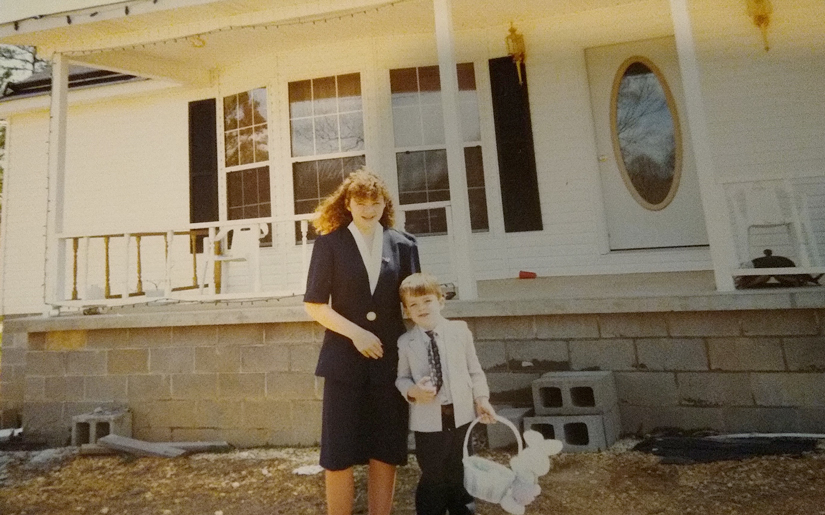 Peggy’s children stand in front of their rebuilt home.

In 1991, Peggy Monroe’s husband had just returned to their rural Tennessee home after serving overseas in Operation Desert Storm. That’s when the unthinkable happened.

“Our house caught on fire and burned immediately,” said Peggy. “We had nothing. Everything was destroyed.”

As Peggy and her husband were coping with the loss, her unit president encouraged her to apply for assistance through the Auxiliary.

“She said, ‘You know there is the Auxiliary Emergency Fund you can apply for to receive aid,’” Peggy said.

Soon after, Peggy was awarded $1,500 in assistance to help her and her husband overcome the challenges they were faced with.

“It paid rent for six months while we rebuilt our house,” she said.

Receiving that assistance drove Peggy to appreciate the American Legion Auxiliary even more. Nearly three decades later, she’s still preaching how thankful she is for the Auxiliary Emergency Fund assistance she received.

“I think it’s one of the best things we have,” Peggy said.

Now, she shares her story every opportunity she gets.

“When I know of somebody who needs help around my area, I definitely tell them about it,” she said.

And Peggy will continue doing so well into the future.

“Pride doesn’t get in my way because I feel like it motivated me to enjoy what I’ve been doing all these years for the American Legion Auxiliary,” Peggy said. “It’s my heart, and I just continue to try to help other members and veterans.”

Peggy said she plays her part by donating to the Auxiliary Emergency Fund to ensure other members are cared for during their greatest time of need.

“This is members taking care of members, and that’s what we should do,” she said.

“I’d like to encourage more people to donate to the Auxiliary Emergency Fund because it’s always needed and we need to increase that fund,” Peggy said.

Join Peggy in donating online to the Auxiliary Emergency Fund.