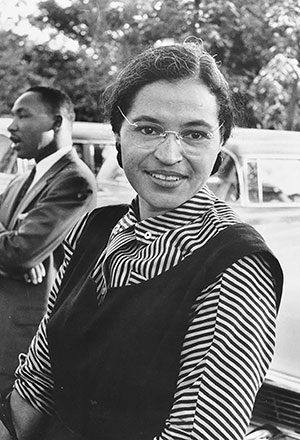 On this day in 1955, Rosa Parks boarded a bus in Montgomery, Alabama, after work and sat down in the section designated for black passengers. As the bus filled up, she was asked to give up her seat to a white passenger and when she refused she was subsequently arrested. Parks would later say she was not physically tired, but she was tired of giving in. Her refusal sparked a yearlong bus boycott in Montgomery and ultimately led to the US Supreme Court ruling that bus segregation laws are unconstitutional.

Parks was 42 when she was arrested, and although she became synonymous with the civil rights movement almost overnight, she was an activist even before her arrest. She joined the Montgomery chapter of the NAACP in 1943, and she was kicked off a bus in 1943 after refusing to reenter the bus through the back door after paying her fare at the front. Her act was instrumental to many other challenges to segregation laws in the United States.

“I had no idea that when I refused to give up my seat on that Montgomery bus that my small action would help put an end to segregation laws in the South,” Parks wrote in her autobiography. “I only knew that I was tired of being pushed around.”

Parks died at age 92 in 2005. She became the first woman to lie in honor at the Rotunda of the U.S. Capitol.