Sending joy through the mail

The holidays will be a little brighter for our servicemembers who are away from home this season, due to the efforts of the members and friends of the Sgt. John W. Powers Post American Legion Auxiliary Unit 59 in Milford, Mass. Cards and letters are written throughout the year, and 21 cartons containing 19,695 greetings were shipped to Troop Fan Mail’s sorting facility in Missouri. From there, they will be sorted and sent to over 500 locations around the world where U.S. military troops are stationed.

This project is part of Troop Fan Mail, a nonprofit organization that has been sending holiday greetings to servicemembers for over 50 years. The Milford Auxiliary pays for the cards, the per piece mailing dues to Troop Fan Mail, and the shipping costs to get the cards from Massachusetts to Missouri. 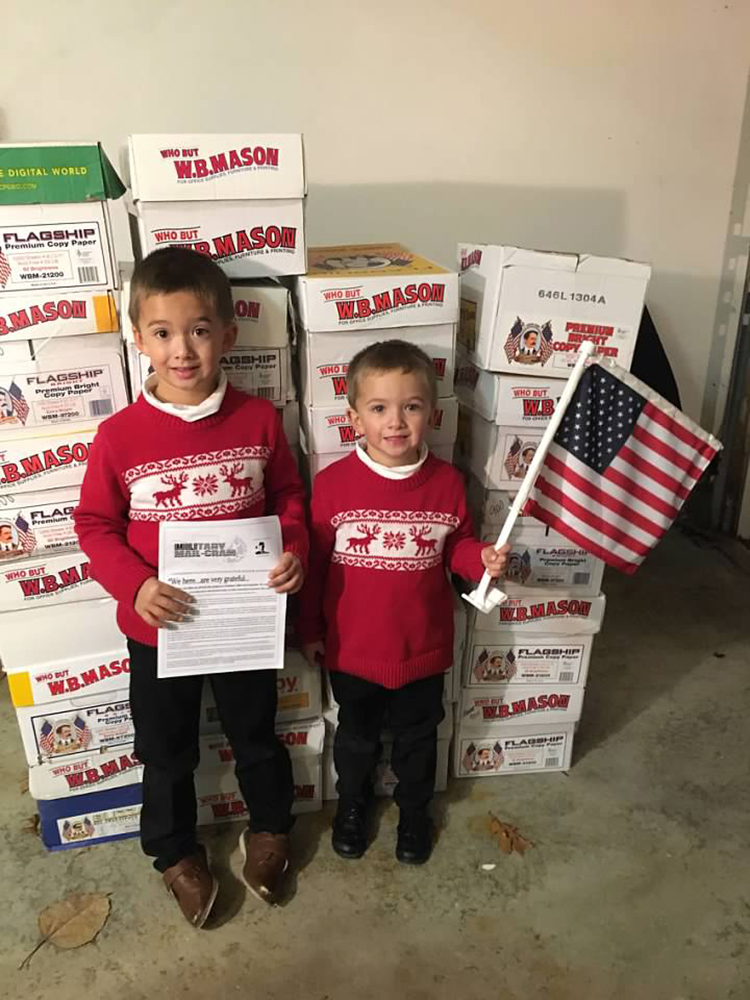 David, 6, and Nicholas, 4, help pack the 22 boxes of cards and letters that were recently shipped to Troop Fan Mail. The Monroy brothers are members of the Sgt. John W. Powers Post 59 Sons of The American Legion.

Members work throughout the year under the direction of Jo-Ann DeMaria Morgan, who has chaired the program for more than 35 years. Morgan encourages community members to donate cards, as well as assist with the card writing campaign. Several local organizations make monetary donations to help defray the cost of the program. Fundraisers are held throughout the year highlighting the program, and the response has been overwhelmingly positive and heartwarming.

Many responses have been received over the years from military personnel who have received the greetings. Pen pals have been established, and lasting friendships formed.

Mary-Elizabeth Monroy, unit president, participated in Troop Fan Mail when she was in the second grade and made a lifelong friend with a sailor who received her card — his only holiday mail. He promptly wrote back and sent along a gift, thanking Mary-Elizabeth for reaching out. He then visited her at school and was the special guest of her class. He shared information about his life in the Navy and the many foreign countries he had visited. This friendship blossomed and continued over the years. The now-retired sailor and his family were present at Mary-Elizabeth’s high school and college graduations, as well as her wedding. Many visits have been made over the years, and he and his wife are the godparents of her second son, Nicholas. A true lasting bond was made and continues to this day.

Troop Fan Mail has brought the true meaning of the holidays full circle, and the efforts made to facilitate this program have been most rewarding. It is hoped that the Auxiliary can continue the program with the help and generosity of others. Cards and donations are welcome year-round, as Morgan has already started preparing for the 2022 campaign. All donations are gratefully accepted as the Auxiliary hopes to continue to put smiles on the faces of those away from home during the holiday season, so that we can continue to live safe and free in our beloved United States of America.