Each year, a day is set aside for Americans to pause and remember and honor the brave men and women who were either wounded on the battlefield or paid the ultimate sacrifice. 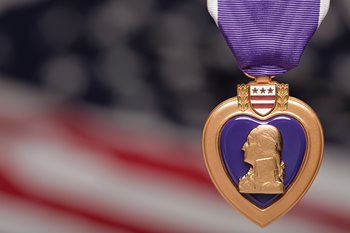 According to the National Purple Heart Hall of Honor, more than 1.8 million Purple Heart medals have been presented to servicemembers since the award was created in 1782.

The Purple Heart medal is awarded to servicemembers who have been wounded or killed as a result of enemy action while serving in the U.S. military. They can also be given posthumously.

Originally introduced as the Badge of Military Merit by General George Washington in 1782, the Purple Heart is also the nation’s oldest military award, according to VA.gov.

The award was truly a military medal by the people, of the people, according to USO.org. It was one of the first awards in military history that could be given to lower-ranking, enlisted soldiers or non-commissioned officers for their outstanding service.

The modern-day look and name came in 1932, thanks to Army Gen. Douglas MacArthur. He was also the first servicemember to receive the Purple Heart for his service in the Pacific, specifically in the Philippines, during World War II.

President John F. Kennedy is the only president thus far to receive a Purple Heart. He served in the Navy during WWII.

Servicemembers can receive multiple Purple Hearts throughout their military careers.

According to VA.gov, the design of the medal is specified by Army regulations — an enamel heart, purple in color, and showing a relief profile of George Washington in Continental Army uniform within a quarter-inch bronze border. Above the enameled heart is Washington’s family coat of arms between two sprays of leaves. On the reverse side, below the shield and leaves, is a raised heart without enamel bearing the inscription, “For Military Merit.”

The Purple Heart is ranked immediately behind the Bronze Star and ahead of the Defense Meritorious Service Medal in order of precedence.

Do you know someone who received a Purple Heart? Share their story with us!