Past ALA Scholarship Recipient Graduates from U.S. Air Force Academy 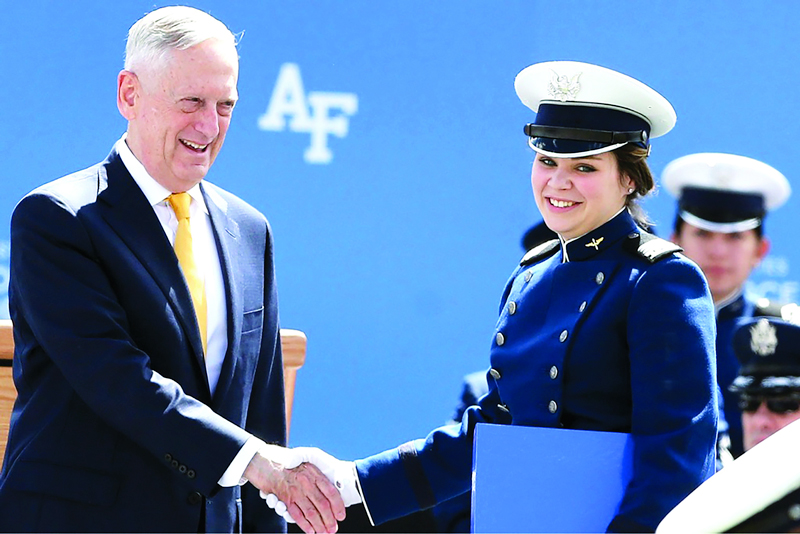 There are many American Legion Auxiliary Junior members with success stories, including several who have joined the Armed Forces.

Victoria Wright is a past ALA Spirit of Youth Scholarship recipient who graduated from the U.S. Air Force Academy this past spring and was commissioned as a second lieutenant.

When she was in seventh grade, Wright knew she wanted to join the Air Force after her father told her about the Academy.

“I wanted to be a part of something bigger than myself and give back to the men and women who had given so much to me,” she said.

Wright is eligible for ALA membership through her mother, father, and stepmother. She’s a dual member of the ALA and The American Legion, currently a member of Auxiliary Unit 340 in Pensacola, Fla., and a member of Legion Post 400.

As a Junior, Wright remembers her time as honorary unit Junior president.

“There was an age gap [among Junior members and those 18 and older], but we all had the same values and were supporting the same goals and missions,” she recalls. “Even though we had different life experiences, we had more in common than not. I got to meet a lot of inspiring and amazing people because of the volunteer work and outreach I did.”

Wright remembers being notified in 2014 that she was a recipient of the National American Legion Auxiliary Spirit of Youth Scholarship. This $5,000 scholarship is provided annually to one Junior member in each of the five ALA divisions.

“The scholarship meant the most because of who it came from and what it symbolized … I was so humbled that an organization that meant so much to me and my family thought that I was a worthy recipient and represented them, their values, and beliefs well enough to be a winner,” she said.

Wright used the scholarship to help pay for books and various other school supplies while an English major with a double minor in French and philosophy.

At the Air Force Academy, Wright said she was challenged each day, but continued to grow as a person and as a leader.

She credits the leadership skills she learned from her years as an ALA Junior, which helped her succeed in the Academy.

“Not only did the leadership skills from the ALA help at the Academy, but the general life and people skills the organization taught me helped,” she said.

Wright’s hard work paid off. She was selected to be a public affairs officer for the Air Force, one of only six openings for that role. She attributes some of her success to the ALA and how it helped prepare her as a military officer.

“My unit loved to make me talk at meetings and pushed me to learn the answer to my own questions,” she said.

Over the years, her unit helped prepare her for this career path, she added.

“Thank you for mentoring me, supporting me, encouraging me, and believing in me for the past 10 years,” Wright said she would tell her unit. “I wouldn’t have made my dream a reality without your help.”

Helping Juniors like Wright with their leadership potential will help ALA’s younger members succeed in the organization.

“Both the ALA and the Academy have such special places in my heart and introduced me to so many people who changed my life for the better,” Wright said. “It’s hard to imagine who I would be today and where I would be without both these organizations.”

This story was originally published in the November 2018 Auxiliary magazine.

To learn more about the American Legion Auxiliary, visit www.ALAforVeterans.org.