Part 1: Get Creative with Poppy Distribution

Honor the fallen and support the living.

This motto has been part of poppy distribution for decades, with proceeds going toward veterans, military, and their families.

Thinking outside the box for poppy distribution
As we all experienced last year and yet this year, the pandemic has changed the way members distributed the poppy and the way we’ve celebrated National Poppy Day. Since our founding, ALA members have continued to be resilient in whatever they face, and continuing to promote the poppy is no exception. 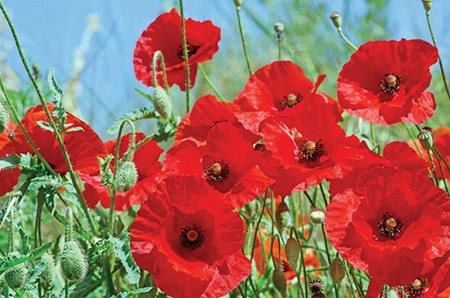 Last year, many members didn’t do anything for National Poppy Day because they didn’t know how to do it contactless, as the Auxiliary is such a hands-on organization. But the pandemic didn’t stop some units, like Unit 45 in Greenbrier, Tenn., whose members figured out a way to continue with distribution while keeping its members and community safe. Lessons learned from last year’s event have prompted the unit to do a contactless drive-thru poppy distribution again this year.

“Think outside the box,” said Kathi Carney, president of Unit 45, as part of her advice to other members. “Look at your location and what you can do in that location to get your community behind you.”

If that location — say, your post home — doesn’t work well for an event like this, Carney suggests borrowing someone else’s location for your poppy distribution.

Last year, the flow of Unit 45’s event went really well, so they plan on duplicating that again. One change based on last year’s event will be instead of it simply being focused on distribution, it will be more of a drive-thru educational event, showcasing different pieces of history with the poppy so people can go slower and read. Community members can also park and walk to read the signs if they wish. The unit is also adding a copy of the In Flanders Fields poem in the bags with the poppies so people will have that history to take with them. Carney added they also hope to make a giant poppy out of plywood with a hole in the middle so people can put their head through and take a picture.

One suggestion Carney has for those thinking of doing a drive-thru poppy event is to make sure to have good signage, especially facing two sides, as visibility from both sides of the road is important. After last year’s event, the unit has decided to purchase a second sign.

Carney said the ease of the event for members was a determining factor in doing it again for 2021. Rather than having members out at local stores, conducting the event at the post made it easy for members to go inside and take a break from volunteering and/or from the elements, make more poppies, and also gave the opportunity for more American Legion Family members to get involved being held at the post home. The Family aspect, Carney said, was a key part to their success and suggests units work with other parts of the Family, even reaching out to another post if needed and doing something jointly.

Unit 45 utilized social media to spread the word about their poppy distribution last year and plan to do so with this year’s event.

“Facebook has been our friend without a doubt,” Carney said. “We pushed a lot of things out through social.”

Carney offers advice to other units thinking of doing a contactless poppy drive-thru or something different than what they usually do.

“You just have to be creative,” she said. “Sometimes we get stuck in a rut and are not thinking outside the box at all. The more creative you are, the more you engage the community, the better off you are. Your community embraces you when you try something different.”

Bonus tip: Collaborate with a local business to include coupons for a small item. For example, Unit 5 in Tampa, Fla., added a twist to its poppy drive-thru event. They partnered with a local McDonald’s and got “bounce back” coupons for a free burger, which they then included with the poppies during their distribution. In less time than a traditional poppy distribution event with a membership of only 42, the unit earned over $1,000 in donations!