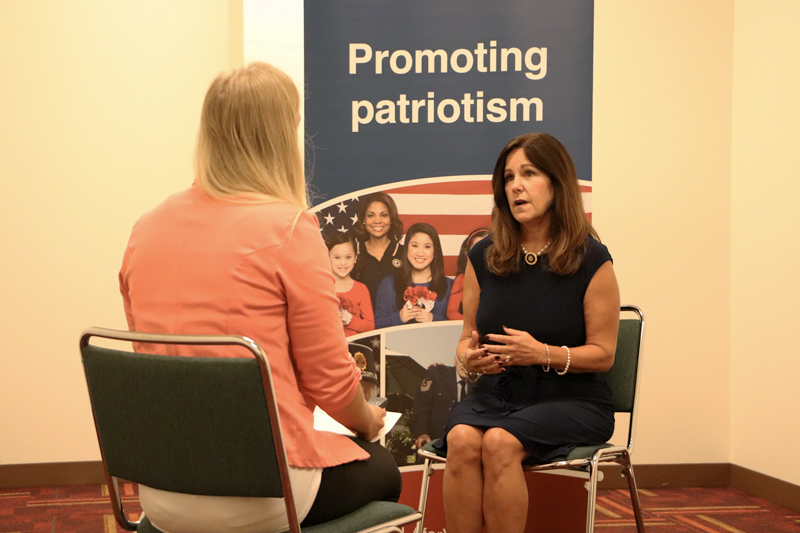 Second Lady Karen Pence received the Public Spirit Award from the American Legion Auxiliary at the 2019 National Convention. ALA National Headquarters staff sat down with Pence to learn more about her passion for our veterans, military, and their families. Following is that interview.

What does receiving the Public Spirit Award from the American Legion Auxiliary mean to you?

Why are you passionate about helping our veterans, military, and their families?

I think if you don’t grow up in a military family and you don’t grow up around the military, people don’t understand the sacrifices military spouses make. They are just not aware. I just feel like if the general public could understand a little bit about what our military spouses go through — some of the sacrifices they make — I know they would be willing to come alongside these spouses, but they just don’t understand.

And some of the struggles our military spouses go through can be fixed fairly easily. Licensing issues, being able to apply for licenses earlier — some states make them move to that state, show that they have a residence before they can even start applying for a license. Those times get in the way and delay them from any employment.

I understand your son is in the Marine Corps. We thank him for his service. What does it mean to you as a mother to know there are organizations like the American Legion Auxiliary who support our military families?

I think it’s great when you have these new, young spouses, male or female, who are just learning what it’s like to be a military spouse. It can be a frightening thing. And it can be very intimidating. So, to have someone come alongside … I know a lot of what the Auxiliary does is education. Just to educate the citizens of some of the things going on with these spouses is really, really important. I just think any time you can, look to a mentor to say, “How did you get through it?”

I shared in my remarks today that we had the joint chief spouses travel with us to our announcement, and it was interesting to hear them say some of the wonderful things they had experienced as military spouses. One spouse had been in over 40 years. And she said, “I really don’t want it to end.” And that’s what our young spouses need to hear when they are going through that first deployment. They are scared to death; they are wondering, What does this mean for my family? Just to know this is a good life. I think the military, especially, is one organization that comes around all its members. They just wrap their arms around the newbies. And it’s really a beautiful thing to observe. So the American Legion Auxiliary is a fabulous organization, and they do some really great work.

Is there anything else you want to add?

I know you have your [Veterans] Creative Arts Festival. I only have one other major initiative, and it’s art therapy. We are working a lot with Walter Reed [Army Medical Center] right now. Art therapy is so successful for our soldiers who come back with PTSD. They just need to ask for the help.

The side of the brain that is injured during trauma is not the verbal side. So when these guys come back and they can’t talk to their family about what they are going through, the art really helps. They start working with clay or they will be painting something and all of the sudden, they will say, “That’s my nightmare. There it is. That’s what I couldn’t talk about.” It’s so successful. The brain is malleable, pathways in the brain can be changed, and these soldiers talk to me and say, “I don’t go to that dark place anymore.”

So the fact that we do have something that can help these vets and the fact that you all talk about art therapy and you created [support] the arts festival, is very powerful. So I just want to applaud you all for that too. Keep telling that story as well. It’s very powerful for our vets.