Membership recruitment can start within your American Legion Post home 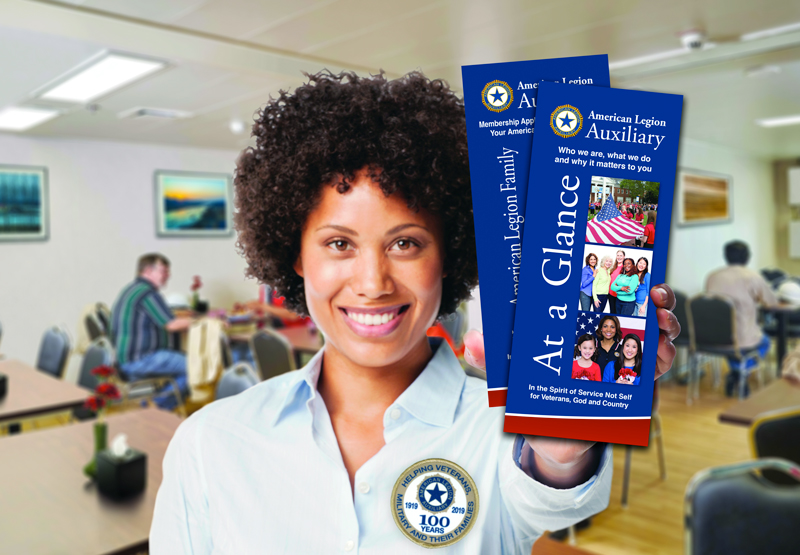 Think of all the non-members who hold events at your post throughout the year. Might some of those women and girls be eligible to join ALA? You’ll never know until you ask. But be gentle and welcoming with your inquiries; hard sells can be a turn-off to someone, even if she is eligible to join. Briefly talk with them about the ALA: what we do and why we matter.

And, just as she would do to be friendly and welcoming to anyone who comes into the post home, Crouch spoke to the women in the knitting circle.

“I approached them, as a group, told them about ALA and asked if any of them were interested in becoming a member or contributing to our cause in any way in as far as donations or whatever they felt they could give to us. And I let them know we would welcome them with open arms. More than half of them said, ‘Oh yes, we’d love to help you.’ I also asked them if they have family members who might be eligible for membership and who might want to join,” Crouch said.

As of published this post, 10 women from the knitting circle have joined Unit 500. Crouch isn’t stopping there, she said.

“Right now, I am working on seeing if their granddaughters are eligible to join. I’ve already asked about their daughters.”

Of those new ALA members from the circle, at least half of them are at the unit on a weekly basis involved in some project or event, while others help in different ways, such as contributing when donations are sought for mission-based outreach, Crouch explained.

“When you educate people about ALA and then talk with them about possible membership in our organization, you have to sincerely show you are interested in them for them — not for their dues money or because they could help you reach your membership goals. No one wants to be used,” she added. “That helps you connect with good people.”

And connect, they did. Several friendships have developed among some of the members already in the unit and the new ones recruited through the knitting circle, Crouch confirmed.

When Melanie Findley walked into Unit 500 as part of a local knitting circle, she didn’t expect to find that the American Legion Auxiliary’s mission was so in line with her values. But she did.

In fact, she was glad someone offered information about the ALA. Once she discovered how the Auxiliary honors and supports veterans, servicemembers, and military families — and all of the ALA’s youth and patriotism-based activities — Findley was hooked. After learning she was eligible for membership, Findley joined Unit 500.

She hit the ground running as a new unit member, coming up with mission-based ideas and working with fellow unit members to put plans in motion. One of the ideas was a successful fundraiser — a tribute wall called Celebrating Our Veterans. Learn more about the projectat Unit 500’s website at www.ALA500.com.

This article was first published in the February Auxiliary magazine.