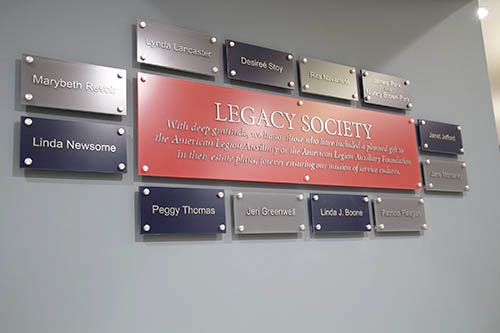 For 100 years, the American Legion Auxiliary has relied on generous donations to continue the support of veterans, military, and their families. These gifts have allowed the Auxiliary to provide hope in times of need, support for education and youth leadership programs, grants for veterans’ art therapy, and much more.

In February 2020, a commemorative donor wall was installed on the first floor of ALA National Headquarters, displaying the 25 initial Legacy Society members. This group of dedicated individuals have chosen to include a planned gift to the American Legion Auxiliary or the American Legion Auxiliary Foundation in their estate plans. Since the unveiling, an additional three donors have joined the Legacy Society and will have their names displayed on the wall later this year.

“This was decades in the making,” said Madison Maves, Development Division director. “I’m so excited we have a place to honor such an amazing group of people who are passionate about the mission.”

Meet two of the names on the wall

Ann Crawford was signed up for the American Legion Auxiliary the day she was born. Both of her grandfathers served in World War I, while her mother and father served in WWII, and her father was recalled for Korea.

It is no surprise that Crawford’s entire life has been dedicated to honoring their legacy through her service in the American Legion Auxiliary.

“My father told me I couldn’t join the military, so this is the way I serve, “Crawford said. “It’s built into me.”

To extend that service even further, she made the decision to leave a planned gift by simply making the ALA a beneficiary of her IRA.

“There are so many good programs in the ALA that need to be supported, and if we don’t support them financially, they won’t exist and we won’t be able to support them with our time,” Crawford said.

Jeri Greenwell says the American Legion Auxiliary has given her so much over her nearly 53 years as a member. That’s why she makes it a priority to give back.

“I really feel that you should devote all of your passion and support to the program that best reflects your values; the ALA certainly does that,” Greenwell said.

For Greenwell, the daughter of two U.S. Marines, leaving a planned gift to the Auxiliary in her will was an easy choice. So when she went to rewrite her will, she simply stated her wishes. Then she notified the ALA of her intent.

“I would encourage others to do the same,” Greenwell said.

“By doing so, they will help our organization honor those who fought, those who gave their life, and those who willingly stand ready today to do the same, without question, when the defense of freedom calls on them.”

As the American Legion Auxiliary moves into our second century of service, we are looking to build an even stronger future.

We ask that you join us in this mission by becoming a part of the Legacy Society. Each gift — no matter the size — will provide future financial support to the Auxiliary.