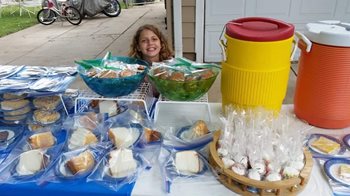 ALA Junior Tessa McConville wanted to have a lemonade stand.

The 9-year-old from Kansas didn’t set a goal amount she wanted to make from her endeavor, but she knew whatever it was would be donated to the Kansas Veterans Home. 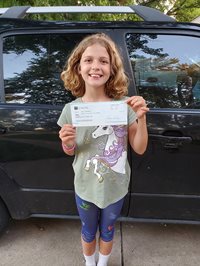 Tessa said she felt “good” when she learned about the amount of money she had raised from her lemonade stand, and was even ready to do another one the next day.

“It blew me away,” said Ashley McConville, her mother. “We counted it up and it was $886, and then, throughout the week, we got more donations. By the time we took it down, it was over $1,000. People wanted to keep donating.”

Tessa, her parents, and a good friend of the family’s, drove the money to the Kansas Veterans Home, which is two-and-a-half-hours from their home in Abilene, Kan.

For other young Juniors or Sons of The American Legion members who may want to have a lemonade stand, Tessa offers advice, with the help of her mom.

“Have a good cause — like to veterans,” Tessa said.

Her mother elaborated: “I kind of told her you need to have a reason to want to have it, a place you are donating money to, and have a sign to let people know. You are going to have a lot more success with it.”

What a difference the money donated to that lemonade stand is going to make for Kansas veterans. Way to go, Tessa!