Anisa Cornett, 20, a sophomore at Texas A&M University and an ALA Junior Member Loyalty Scholarship recipient, has been an active member of the American Legion Auxiliary since she was a toddler. She began by participating in her unit’s flag ceremony on Veterans Day and Memorial Day each year at age 5 and would only get more involved. 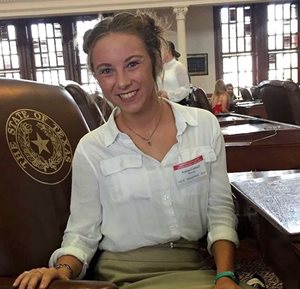 Cornett has a strong passion for serving veterans, military, and their families. With a grandfather, father, and brother who all served in the military, Cornett has a close connection to our nation’s heroes. However, she shared that her love for serving others has grown deeper during her time as an ALA Junior member, and it has influenced her decision to help others as a career — through physical therapy.

“My personal goal is to help people in the medical field, and by growing up in the ALA and helping veterans, it kind of instilled that I needed to help people for my personal life goal,” Cornett said. “The way physical therapists help — the recovery process, the way they connect with people — I really liked that aspect of the career.”

Receiving the ALA Junior Member Loyalty Scholarship has been a big help in Cornett’s journey in becoming a physical therapist. Paying for an undergraduate and graduate degree is no small feat, and this scholarship is helping Cornett and her family get through her undergraduate degree without having to take out loans. However, the scholarship also served another purpose to Cornett — recognition for her hard work and service as an ALA Junior member.

“I have been in this organization for as long as I can remember,” she said. “Being recognized and just knowing that all the years paid off was really important to me. It just makes me want to stay.”

“I would just thank them so much for everything they do for this organization. It’s people like them who keep this organization up and help support our youth and help send people like me to college to advance their education and hopefully get a good career at the end of it,” Cornett said. “It’s probably the best donation you could make.”