I Am the ALA: Vernel Warren

“Don’t take my picture. I’m just getting myself together. I just lost my husband,” an American Legion Auxiliary member somberly said to fellow ALA member Vernel Warren, who had been taking photos at a local Auxiliary event. The words shook Warren to her core, and she responded the only way she knew how: with compassion. 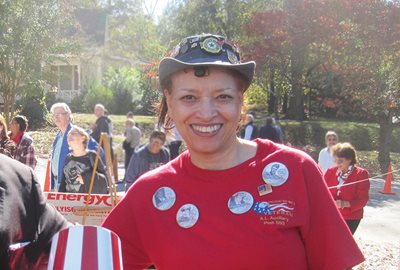 “I lost my husband, and thank God for the Auxiliary. Because the Auxiliary became my family, and it’s your family too. You have more than just blood family. You have us,” Warren told the member. After that, the recently widowed woman perked up a bit throughout the day, Warren added.

Warren has always been committed to supporting our nation’s veterans, military, and their families — in this instance, a veteran’s widow — just as she was lifted up by her fellow Auxiliary members and local Legion Family following the death of her husband, U.S. Army veteran Bennie Wesley Warren Jr., in 2010. A Paid Up For Life (PUFL) member of The American Legion, Bennie served in World War II and the Korean War. Vernel Warren is a PUFL member of the American Legion Auxiliary. The couple started their memberships at the same time.

“Suddenly, in December 2005, my husband announced it would be a good idea to join a veterans service organization. I was speechless. This came after 27 years of icy silence from him when it came to his time in the Army or military-related things in general,” she said.

How did your first interaction with your ALA unit and Legion post go?
The entire post embraced my husband and me at, and ever since, the first event we attended. I thought this was very significant because for the prior 27 years I had been with my husband, he never had a lot of buddies. The [ALA] ladies put me right to work with Auxiliary events. My husband and I really felt welcomed. We felt part of something that helps others.

What makes your ALA membership meaningful to you?
I sum it up in this quote from the Bible: “… There is a friend that sticketh closer than a brother.” (Proverbs 18:24; KJV). You see, I was devastated after watching my husband die in the hospital. He had cancer. Right after he died, everything was a big blur. The Auxiliary, Legionnaires, and Sons of The American Legion members carried me through, and do so even to this day.

What are your favorite American Legion Auxiliary events or outreach activities?
There is nothing more overwhelmingly emotional to me than the Department of Georgia’s ALA Christmas Joy Shop at the Georgia War Veterans Home in Milledgeville. Every moment of it tugs at your heart: the joy of seeing veterans as they pick out gifts to give to their loved ones, and the gratitude you see in their eyes. Then, there are the stand downs to help homeless veterans in many ways. It is a bitter pill to swallow that there are homeless veterans after all they have sacrificed through their service.

Do you think the ALA, as a whole, is a diverse and inclusive organization?
Very much so. I found that out when I attended the joint session of my first department convention. I was struck by the diversity of officers in all ranks and among members. You need ideas and vision to propel an organization. Diverse cultures introduce new and different ways of approaching continuing goals.

Why do you remain an ALA member?
I owe so much to our brave veterans for our freedom. They have given so much. I feel my membership shows them my gratitude.


This article originally appeared in the February 2021 Auxiliary magazine.