I Am the ALA: Mike Monserud 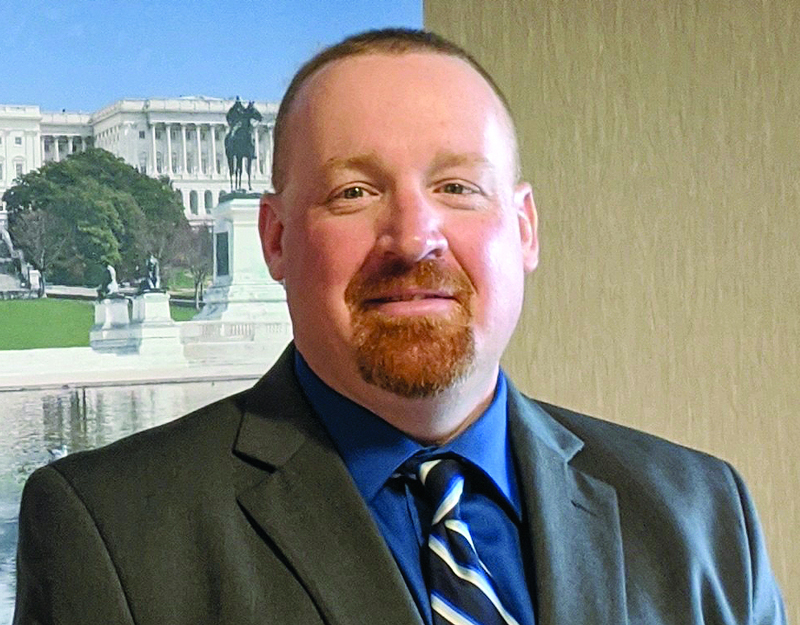 “If one way for me to honor and help veterans is to pay some dues, absolutely I’ll do it. I’ll write checks my for them.”

With fire and conviction in his voice, American Legion Auxiliary member Mike Monserud speaks about the ALA, the entire Legion Family, and their co-mingled missions of service to our nation’s veterans, military, and their families. His fervor-filled tone grabs hold of you. Monserud’s message about The American Legion Family of organizations — what we do and our importance — effectively lingers long after he has finished speaking.

He purposefully uses his voice and delivery to staunchly advocate for veterans, servicemembers, and military families — and to inspire and educate as a topic-specific speaker on Legion Family matters.

Monserud, 41, is a male spouse ALA member of Auxiliary Unit 37 in Ames, Iowa. He said he joined the Auxiliary to honor the military service of his wife, U.S. Navy veteran and Legionnaire Jennifer Monserud. Himself a Navy veteran as well, Monserud is also a Legionnaire of Post 37 in Ames, a member of Sons of The American Legion Squadron 37, and a Legion Rider of Post 37.

What sparked the fire you have for the Legion Family?

I remember going down to the Legion post with my grandfather [World War II U.S. Army veteran Howard Schlitter], and hearing him say things like, “You’ve got to take care of the veterans. You’ve got to be there for them and help them out.” None of that really resonated with me until after he was gone. Then, I realized I have to be his voice.

Why is membership in the ALA, Legion, or Sons important?

It’s important, for anyone who’s eligible, to honor a veteran by joining the Legion Family to carry on that legacy of service to others. It’s that way with each part of the Legion Family, and it doesn’t matter which part you belong to. All of us have banded together for the same reason: to help veterans.

What is the most effective approach to membership recruitment?

How do you explain the reason we have membership dues within the Legion Family?

Your dues money goes to assisting veterans in getting the help they need. With their military service, veterans [metaphorically] gave blank checks to be cashed by our government as far as their lives were concerned. We may not know them, but we owe them. If one way for me to honor and help veterans is to pay some dues, absolutely I’ll do it. I’ll write my checks for them.

In addition to your Legion Family outreach, what other ways do you serve your local community?

I am a volunteer firefighter/EMT and a firefighting instructor in Gilbert, Iowa. I know — I seem serious and intense. But I have a fun side. I never found anyone I couldn’t laugh and joke with.

SONS OF THE AMERICAN LEGION:

This article was first published in the May 2020 Auxiliary magazine.