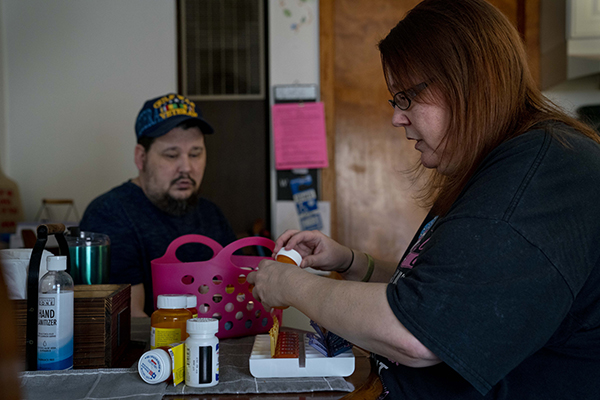 Toni Kettner and her husband, Jason. Toni is his caregiver.

Toni Kettner came across a quote one day that stuck with her, and she tries to live by it: “God found some of the strongest women and made them veterans’ wives.”

In 2006, Jason Kettner became really sick from service-connected disabilities. Much of what he has falls under Gulf War Syndrome. He also has fibromyalgia and was recently diagnosed with early stages of dementia. Kettner and Jason weren’t married at the time, but good friends who stayed in touch over the years. As a veteran, he even spent three and a half years homeless. The two reconnected in 2012.

She left Michigan and moved to Arizona to help care for him. She lived there for a year before they decided to go back to Michigan to seek better care.

In 2016, she and Jason married. The following year, she left her nursing job to take care of her husband full-time.

“I knew I would be home and wouldn’t get to see a lot of people,” she said. “That’s the rough thing about it — you don’t have all the social interactions if you are working full-time.”

That leaves a lot of time when it’s the two of them.

In 2018, the U.S. Department of Veterans Affairs awarded Jason 100% disability. But Kettner said she still catches grief from people who say he doesn’t look that sick.

“He has more bad days than good,” she said, emotion heavy in her voice. “I have to help him get to the bathroom, get him up and down off the toilet. I definitely have to be there when he is showering. A lot of it has to do with his fibromyalgia. His shoulders are pretty bad, he has stomach issues, he has some damage to his lower back. Again, all service-connected disabilities.” 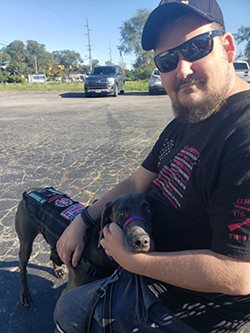 To get around the house, Kettner is often by Jason’s side, or he uses a cane or walker. Jason also now has a service dog, Hera, to help him with his mobility and seizures.

“She has been a gift to have her here with us,” Kettner said. “When he has nightmares, Hera knows how to turn the lights on for him and wake him up.”

Like many caregivers, Kettner lives with the emotional and mental aspects of this life daily.

“The loneliness — the feeling that all your friends have abandoned you,” she said with heavy sadness. “Not so much military wives, but civilian friends.”

Along with loneliness, Kettner said she regularly experiences a range of other emotions.

“I have a lot of anger, and sometimes I lose my patience,” she said. “I have guilt. If I go to my [ALA] district meeting, I’m gone for four hours, and I feel guilty that I am there and he’s not. Or if I go to The American Legion post, I feel guilty texting him to see if he’s OK. I feel guilty when I go out without him, like I’m doing something wrong.”

Because of the constant care required, burnout hits Kettner, like it often does with other people in her shoes.

“I don’t want to do anything — I just want to lay in bed all day and not move,” she said. “I could care less what happens during the day and then I’m resentful and angry and just want to run away.”

To combat these feelings, Kettner understands the importance of respite. 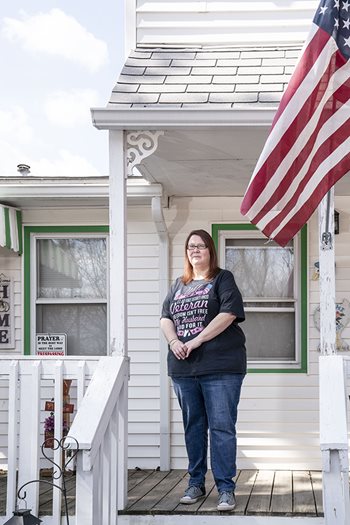 Toni Kettner at her home in Michigan. (Photo by Sarah Rice)

“If I could tell any caregiver — make one to two hours every day for yourself and not feel guilty,” she said. “Self-care is most important, even if it’s just the grocery store to walk around. Just to know you are getting out and seeing other people.”

During that time to herself, she likes to catch up on TV shows, complete any work she needs to do as a service officer for The American Legion, or attend the twice-monthly Friday night dinners at her local post home.

“The American Legion Family has helped with caregiving,” she said. “It is wonderful to belong to the Legion Family. I haven’t found any other organization that has given me as much care and understanding.”

In addition to the Family, Kettner is also part of a caregivers program at the VA hospital in Ann Arbor. The program helps her if she needs to talk to a therapist, social worker, or psychologist.

“It gives me the therapy I need, the mental health part,” she said. “I was diagnosed with secondary PTSD because of Jason and his nightmares and how paranoid he gets.”

Although the discussion is often on the one being cared for, Kettner offered her thoughts on what others can do to help the caregiver.

“I always thought it would be nice if someone would say, ‘Would you like to go out for a cup of coffee and talk, or do you guys want a meal dropped off for you?’” Kettner said. “Something small like that — they don’t realize it’s something big.”

Reflecting on her caregiver role, Kettner doesn’t regret the direction her life has taken — she embraces it.

“I took that vow to death — sickness and in health — everything,” she said. “I would do it over again. I would choose this life over and wouldn’t think twice.”