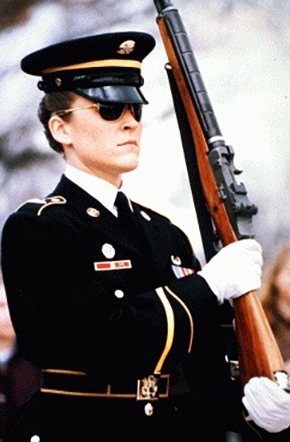 “There is no higher honor…I can’t think of anything else I’d rather do for my country than to guard the Unknowns.”

Sgt. Heather Lynn Johnsen made history on March 1996 when she became the first woman to earn the prestigious tomb guard badge and become sentinel at the Tomb of the Unknowns at Arlington National Cemetery.

It is something Johnsen always wanted to do, but she didn’t do it to be recognized. “It didn’t matter to me if I were the first or the eighth [woman]…I hoped I would not be the one and only.”

Johnsen joined the military after graduating high school in 1994 and rose through the ranks of the 3rd U.S. Infantry, also known as The Old Guard, to became only the 389th soldier in 38 years to earn the silver tomb guard badge. Not to mention the only woman.

Johansen said she feels the need to honor those who gave up everything, even their identity, for their country.

“The least I can do is give them my best,” Johnsen said.