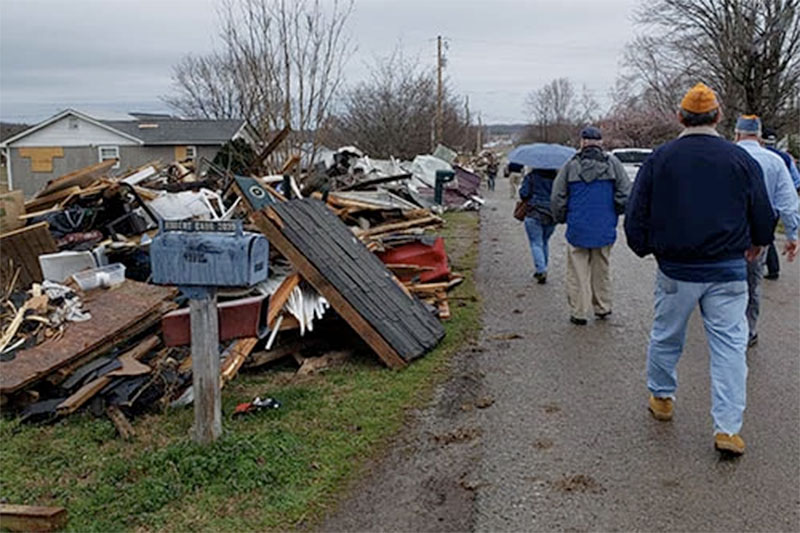 The COVID-19 pandemic has taught all of us that our lives can change in a moment. Life changes quickly, unexpectedly, and we can’t stop it.

The feeling of your heart sinking when you hear the word “cancer.”

The defeat when your employer says, “Your position has been eliminated.”

The anxiety when weather forecasters say a hurricane is headed your way.

The disbelief when your home is destroyed by a tornado.

These are just a few examples of how the unexpected can turn our lives upside down. Most will feel at a loss on how they are going to survive this setback financially. Thanks to the Auxiliary Emergency Fund (AEF), some of those financial worries can be lessened.

Since 1969, Auxiliary members have been helping each other get through tough times thanks to the AEF. The fund was created with a bequest from the estate of American Legion Auxiliary member Helen Colby Small of Burlington, Wis.

These grants of up to $2,400 are awarded by the AEF grant committee on a case-by-case basis. They may be used for shelter and utilities. They may not be used for medical expenses or debt such as credit cards. Members of the American Legion Auxiliary whose dues are current and who have maintained membership for three consecutive years (the current year and immediate past two years) are eligible to apply.

In 2017, several members of ALA Unit 33 in Beaumont, Texas, received AEF grants after their homes were flooded during Hurricane Harvey. One of those recipients was Judy Lackey.

Lackey and her husband, Ron, were on vacation when they heard Hurricane Harvey was approaching Texas. This vacation was a special one for the couple – it was a celebration of Ron finishing chemotherapy treatments. Their celebration was dampened by the fear their home could be in danger.

As the Lackeys attempted to return home, they were met with serval obstacles. Because of the storm, they could not get a flight. They rented a car, but still couldn’t get home because of flooded roads. It was more than week before they could return and access the damage.

When they finally arrived, the water had receded, but many of their belongings were destroyed, and mold was found throughout the house. At one point, the water in their home was 53 inches deep. As damages were repaired, the Lackeys were displaced for eight months.

The thought of applying for an AEF grant hadn’t crossed Judy Lackey’s mind. She was aware of the grant but didn’t know there was an expedited form for those in immediate need. A fellow ALA member had heard about the damage to the Lackeys’ home and told her she was eligible to apply. Lackey quickly filled out the application. “It was a blessing,” she said. “It helped out tremendously. We are greatly appreciative.”

Lackey shows her appreciation by paying it forward. She makes quilts and donates them to her unit to be raffled as a fundraiser for the AEF.

Spreading the word about the AEF is an important way to support fellow ALA members. You never know when someone will face a crisis. If you know of a member who could use help, let them know about the fund.

Sharon Atkins of Alabama sprang into action to help tornado victims in Cookeville, Tenn., earlier this year in March. “The stories coming across the news were heartbreaking. I called our department president and asked if she could reach out to the Department of Tennessee’s Auxiliary president to see what the Department of Alabama could do to help,” said Atkins. “At that time, I started making calls to units across Alabama to see if any were interested in helping the people of Tennessee.”

Members of The American Legion Family in Alabama eagerly joined in. They began collecting financial donations to help out with immediate needs. They coordinated their efforts with Legionnaire Richard Buford of Cookeville, Tenn. Buford chartered a bus for members of both Alabama and Tennessee to tour the area and talk with members whose homes were destroyed or damaged.

“We not only talked with them, we hugged them and offered them support, we cried with them as we heard their stories, and we prayed with them,” recalled Atkins. “Also, the coordination between all the various organizations that descended upon Cookeville to help was amazing to witness.”

As Atkins toured the area, she shared expedited AEF forms with members of Unit 46 in Cookeville. She found that many Auxiliary members knew about the AEF but did not know an expedited form existed. “This was a humbling, yet gratifying experience,” said Atkins. “It felt good to help a neighboring department in their time of need.”

Receiving help is a positive memory from a troubled time a person’s life. Tennessee ALA member Peggy Monroe and her family lost their home in 1991 to a fire. As they were dealing with the loss, her unit president recommended she apply for an AEF grant. Monroe was awarded $1,500. “It paid rent for six months while we rebuilt our house,” Monroe recalled.

Nearly 30 years after the fire, Monroe still tells others how thankful she is for the assistance she received and shares the importance of the fund whenever she has the opportunity. “Pride doesn’t get in my way because I feel like it motivated me to enjoy what I’ve been doing all these years for the American Legion Auxiliary,” Monroe said. “It’s my heart, and I just continue to try to help other members and veterans.”

Monroe now helps other members by donating to the AEF. “I’d like to encourage more people to donate to the Auxiliary Emergency Fund because we need to increase that fund,” Monroe added.

To continue providing these grants, fundraising is important. Consider hosting fundraisers or donating to the national fund. There are several fundraisers your unit can host. West Virginia ALA Unit 137 in Capon Bridge has had success with painting parties. The ALA Department of Texas raised money for the AEF by asking those who attended the department’s mid-winter convention to donate 100 rolled dimes. The possibilities are endless.

How to apply for an AEF grant:

Your family may also be eligible for help through American Legion financial assistance: