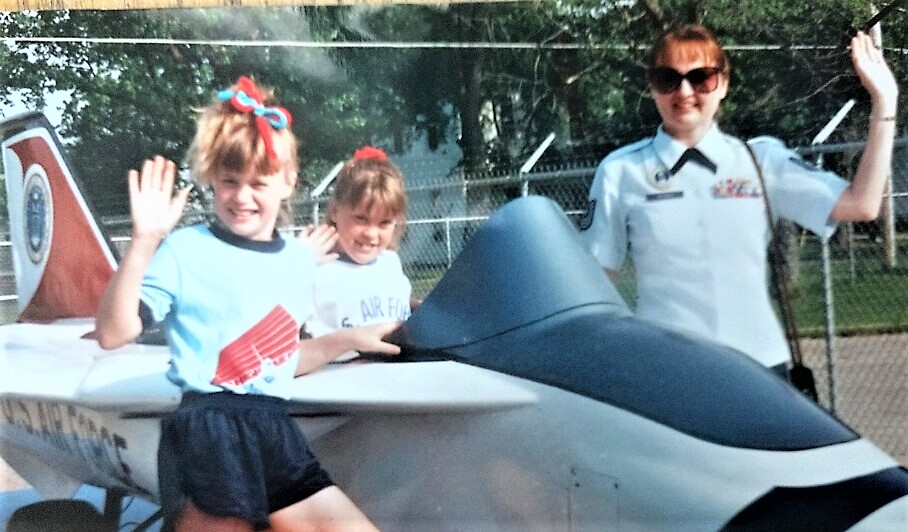 Robin Graber and her sister, Bridget (in the plane), in a model of a U.S. Air Force plane alongside their mother, USAF veteran Rebecca Seaman, during a local parade in the early 1990s.

In honor of Veterans Day 2020, American Legion Auxiliary National Headquarters is spotlighting U.S. Air Force veteran Rebecca Seaman in this guest blog written by her daughter, Robin Graber. Please join the ALA in finding safe ways to honor and show gratitude to America’s veterans today and every day. Even a simple “thank you” can be meaningful to our military heroes. 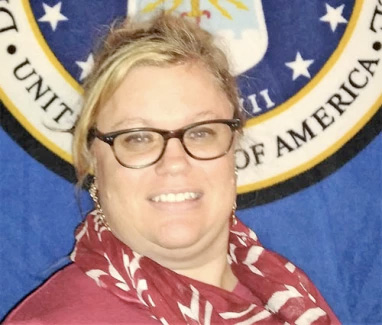 My mother, Rebecca Seaman, proudly served in the U.S. Air Force during the Vietnam War Era. By serving in America’s armed forces, she put others and our nation first. She has always put others before herself, and still does to this day. I see it with how she is with our family and with the veterans in her life who look up to her.

I have always wanted to be like her. She’s a woman who, while in the service, excelled in what was a predominantly male world. She was an aircraft mechanic who worked her way up to crew chief and earned the rank of master sergeant. Yes, I am a little biased because I’m her daughter. But there is something to those facts about her service. It gives me honor, while humbling me at the same time.

I understand and appreciate all the good qualities that the military offers our servicemembers and the lasting impact it has on our veterans.

To my mother, our nation’s other veterans, plus our servicemembers and military families: Thank you all for doing what you did or are doing for our country.

Because of the sacrifices you made for all of us civilian folks to be free, you truly deserve the best. God bless America!

Recently, I interviewed my mother about her military experience and life as a veteran. Here’s what she shared:

Why did you join the Air Force?

Why did you become a crew chief/aircraft mechanic?

America was in the era that women had traditional jobs. The U.S. Air Force was leading the way with placing women in non-traditional jobs. I was one of the first women to go through Aircraft Mechanics School at Chanute AFB in Illinois.

What aircraft did you work on?

I started out on B-52 Bombers, and then on to C-141 and C-5 cargo planes. B-52 Stratofortress Bombers were not as easy to work on as the C-141 Starlifters — which were more maintenance-friendly because components were easier to get to and maintain. I worked on aircrafts for 10 years. The flight line was always a challenge. I worked outside in the weather; there was nothing to block you from the natural elements on a flight line.

Yes! A million times, yes! I was treated as an equal, receiving the same pay and opportunities as any man. I got to travel all over the United States and Europe. I liked wearing my uniform. It was who you were as an Airman; it was your identity. I was so proud to be in the U.S. Air Force.

What did you do after aircraft maintenance?

I went into Air Force recruiting and stayed in the recruiting career field for 10 years. I started out as a non-prior service recruiter, recruiting mostly high-school seniors and young adults in several counties around my hometown in Ohio. I loved telling the Air Force story and what an Air Force career could offer young people. I preached about the money, advancement, training, travel, recreation, education, safety, and security the Air Force offers. I emphasized equality of the sexes and how women can get ahead in the Air Force, and pave their own way in life. I also recruited health professionals, such as nurses and doctors. I excelled in recruiting and was promoted to the advertising and promotions section of recruiting, where I was in charge of advertising over the northeastern United States.

Did you use your education benefits while in the Air Force?

Yes. The Air Force was, for the most part, a regular job. So, I went to college at night and on the weekends. I earned my bachelor’s degree in psychology and master’s degree in human relations while serving our country. I also learned different skills at the base’s recreation centers and wood shops.

For the longest time after I retired from the Air Force, I never considered myself a veteran. I had a hard time adjusting to civilian life. In the Air Force, I climbed my way to the top of the ranks – and after retirement, I felt like I had to start at the bottom and climb my way back up! Being a Vietnam Era veteran taught me to keep my status as a veteran on the down-low. But America has come a long way, becoming a little more patriotic and regarding veterans in a better light. The U.S. Department of Veterans Affairs is very helpful to veterans and is one of our nation’s most valuable and essential agencies.