ALA welcomes male spouses among membership

It’s been over a year since the American Legion Auxiliary extended its membership to include male spouses of female veterans. This new eligibility change creates new opportunities throughout all aspects of the organization. It expands the ALA’s membership recruitment pool, adds more diversity within the organization, increases available resources, and opens more possibilities to better serve our nation’s veterans, military, and their families. 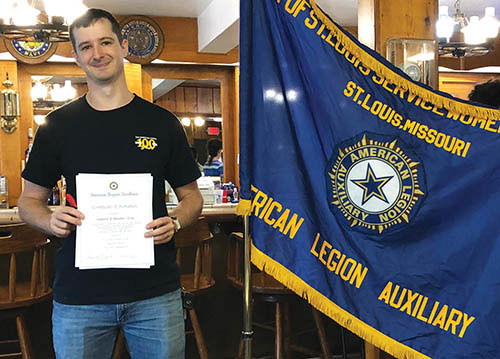 “Joining the ALA is a great way to support your significant other and all veterans. There’s a lot of value to be a member of the organization,” said AJ Detzler-Cox, ALA member of Missouri Unit 404.

Detzler-Cox joined the Auxiliary to support his wife, Shanna, a dual member of Missouri Post 404, and to help make a difference in the lives of veterans and the military community. Like many other male ALA members, AJ is not a dual member. There is a common misconception that male Auxiliary members have to be Legionnaires — this is not true. In order for a male spouse to join the ALA, their veteran spouse must be a member of The American Legion, but they do not have to be.

The ALA’s membership change extends to male spouses of living or deceased veterans, as long as their military service meets a Legionnaire’s eligibility requirements.

“The Legion Family does a lot of great work, and the face of the Family has changed over the last few years. It seems to be much more inclusive,” said Detzler-Cox.

For the past 100 years, the American Legion Auxiliary has been considered a “women’s” organization dedicated to supporting veterans, the military, and their families. During that time, female spouses have had the ALA to lean on while their significant other is deployed, but what about male spouses of our female veterans? With this eligibility change, male Auxiliary members will receive the same support while their loved ones are deployed — and whenever they need a friend to lean on.

“My unit has been exceedingly welcoming of me,” added Detzler-Cox. “They were quite excited when I joined because they’ve been trying to push this eligibility change for the last few years.”

Thanks to the majority vote at last year’s National Convention, eligible male spouses can join the Auxiliary online or in person at their desired local unit. For more details regarding eligibility requirements, membership information, and all things ALA, visit www.ALAforVeterans.org.

This article was originally published in the November 2020 Auxiliary magazine.