Indianapolis — the city second only to Washington, D.C. in the number of monuments dedicated to veterans and those who died in war. The home city of the American Legion Auxiliary and The American Legion National Headquarters. The location for our 99th National Convention, a celebration of nearly a century of Service Not Self.

Everyone is welcome to the Circle City for this annual historic event, last held here in 2012. 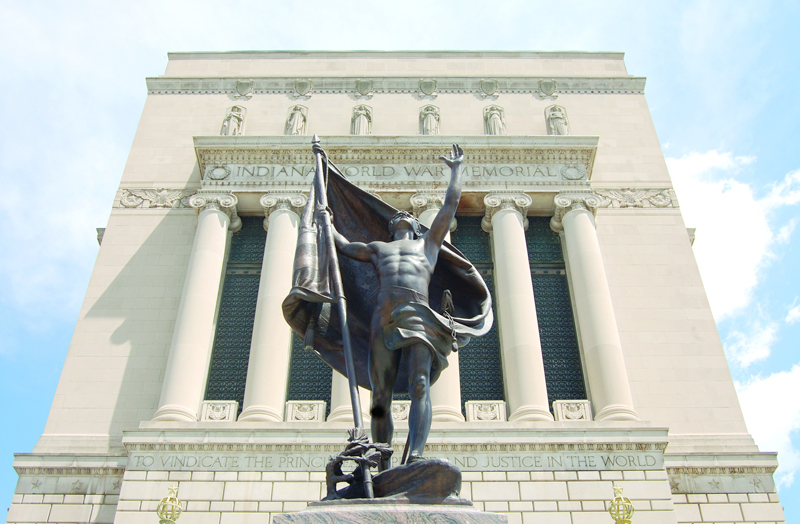 WAR MEMORIAL: The Indiana World War Memorial & Museum honors the Indiana men killed in World War I. The military museum inside also lists all of the Hoosiers killed or missing in action through the Vietnam War. The structure is one of several memorials in Indianapolis to honor veterans and those who died in war.

This year’s 99th National Convention spotlight is on Serving our Heroes, a fitting focus while in a city of monuments dedicated to our nation’s heroes. The focal point on our female veterans will be highlighted throughout convention, ranging from stories shared during platform remarks to videos to the Salute to Servicewomen Award.

Nonbusiness activities also take place during the week of convention. At the start of the week, a community service project gives American Legion Family members the opportunity to roll up their sleeves and help out, working the mission in service to the local community.

This year’s community service project will be with the Hoosier Veterans Assistance Foundation (HVAF) organization. HVAF of Indiana has been in Indianapolis since the early 1990s and houses, supports, and advocates for all veterans and their families to help them achieve the best possible quality of life.

The community service project will be held at the HVAF housing complex on the west side of Indianapolis. The complex houses about 50 former homeless veterans on the property, which contains six buildings and a lot of green space. Service work will focus on beautifying the area.

With help from a great relationship with The Department of Indiana American Legion and Auxiliary, HVAF is better able to serve even more veterans each year. The community service project is a great way to give back to those who have served us. To learn more about HVAF, visit www.hvafofindiana.org.

The annual patriotic memorial service and parade events are always well attended and a part of the week many look forward to — gathering together as The American Legion Family. Both events give all American Legion Family departments the chance to support each other, form friendships, and show Indianapolis the importance and relevance the Family still holds in our country today. The parade is a fun opportunity to see the creative ways members display their patriotic pride streetside.

With so many people in one place with the same focus, convention is a great opportunity to get inspired all over again for our mission. That inspiration is bound to hit you throughout the week when listening to national leaders’ platform remarks, hearing the difference ALA members are making in the lives of those who served, and seeing the excitement from members attending their very first National Convention.

With members gathering from across the country, Puerto Rico, and other places around the world, making new connections is an exciting part of the week. Be sure to say hello to other members — you might make new friends!

A benefit of meeting in Indianapolis is the opportunity to tour the new National Headquarters building. The location at 3450 Founders Road on the city’s northwest side has been the new home since December 2018 and is a testament to an organization of our history and size. 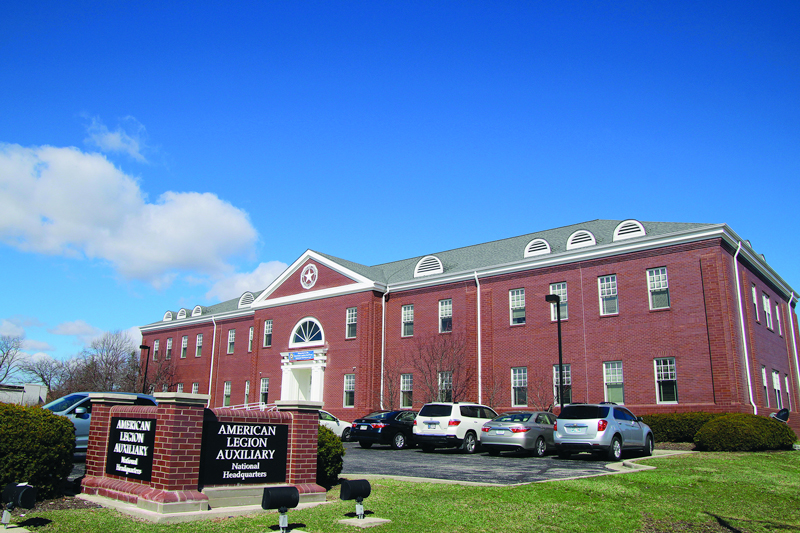 Official tours will be available for National Convention attendees. We encourage you to come and meet the National Headquarters staff who work alongside you to support our veterans, military, and their families.

You will quickly notice the size of the building — much larger than the previous office space, which enables NHQ to host more meetings on site, have a bigger Cavalcade of Memories museum to showcase items in our nearly 100-year history, and a more collaborative work environment for employees to better serve the mission.

Want to know more about the building? Check out the May 2019 issue of Auxiliary magazine for more information on your new American Legion Auxiliary National Headquarters!

Be sure to stop by while you’re in town. This is your home. We’d love to give you a tour!

Setting the stage for a mission-focused event, the week is dedicated to taking care of necessary business so we can use our time, talents, and treasures on those we serve.

At National Convention, officers for the upcoming year are elected, amendments are made to the national Constitution & Bylaws if needed, reports of national officers and committees are received, as well as other necessary business conducted.

The National Executive Committee, the governing body of the ALA with fiduciary, policy, and strategic responsibility for the organization, meets twice during the week of convention — once before and once after. The pre-convention meeting involves the 2018-2019 NEC while the post-convention meeting is attended by the new 2019-2020 NEC members.

Many members arrive over the weekend to attend the Constitution & Bylaws Committee meeting and other pre-convention committee meetings on Saturday. The purpose of the C&B meeting is to consider all proposed amendments to the governing documents that will be presented to the convention body and to verify that amendments adopted by the convention body are correctly incorporated into the governing documents. 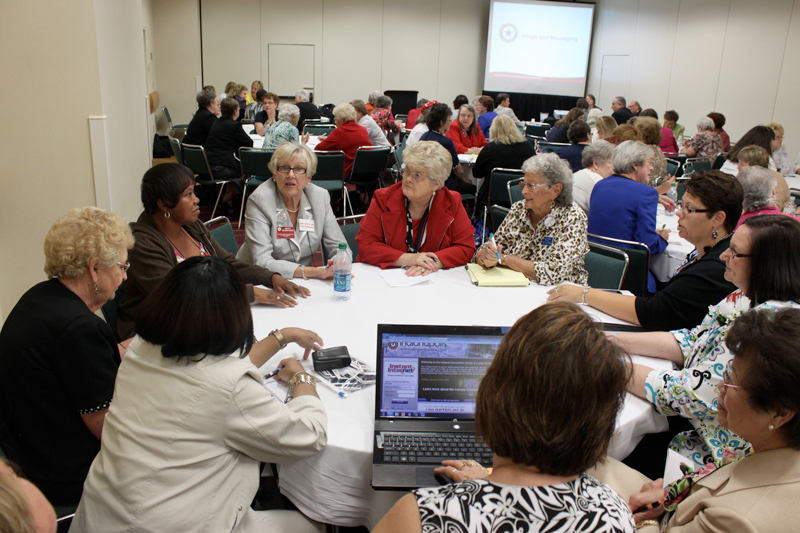 Opening session starts Monday with an overview of this administrative year presented each day followed by breakout sessions throughout the week to help all members gain new skills, learn about our programs, and get ideas on working our mission. Topics previously included were the ALA Foundation, leadership, membership, and other subjects to help our members help those we serve.

During general session days, attendees will hear from each national chairman about what our various committees accomplished throughout the past administrative year. Many of the stories shared are inspiring and moving and made even more exciting when those units and members are recognized on stage during the reports!

Several major ALA awards are also presented at National Convention to honor outstanding successes in service to veterans, the military, and their families, both within the ALA and out in the community. A host of award recipients is presented on stage, including Woman of the Year, National President’s Award for Excellence, Unit Member of the Year, Salute to Servicewomen, and the Goodwill Ambassador Award. To learn more about national ALA awards, visit www.ALAforVeterans.org/awards.

In addition to the awards presented on stage, the ALA Woman of the Year recipients are also honored at a luncheon and the Unit Members of the Year are recognized at a reception.

During the week, convention attendees have the opportunity to help ensure the ALA mission endures by donating to the American Legion Auxiliary Foundation’s #GivingTuesday campaign at a booth designated for this cause. Those who donate have the opportunity to wear fun items that are popular at photobooths, like large sunglasses and hats, for a photo while also holding a sign with their individual answer to “I give because…”

At last year’s convention, a record number of dollars was raised on site — over $12,000 was split 50/50 between the ALA Foundation’s Mission Endowment Fund and the Veteran Projects Fund, all to ensure our legacy and heritage of Service Not Self for future generations of veterans, military, and their families.

At the end of the week, the offices of president, vice president, chaplain, and historian are elected by National Convention delegates on Wednesday and installed thereafter.

Upon installation in their new roles, these officers will help lead the ALA into the 100th year of the organization, continuing to focus on our mission of enhancing the lives of our veterans, military, and their families.

That evening, the States Dinner is always a great opportunity for The American Legion Family to come together, showing strength in numbers for our great organizations. The event is a chance to celebrate the 2018-2019 administrative year.

The next morning at the post-NEC meeting, 2019-2020 NEC members will begin work toward the next administrative year, steering the organization into our centennial.

National Convention is always an exciting time to review the year’s highlights, honor those we serve, and come together as an organization to inspire one another and remember why we are members in the first place.

For more details on this year’s National Convention, visit www.ALAforVeterans.org/convention. To stay connected through social media for the event, use the hashtag #AuxCon19.

We look forward to seeing you in Indianapolis in August!

This article was originally published in the August 2019 Auxiliary magazine.

SEE IT LIVE FROM YOUR MOBILE DEVICE, TABLET, OR COMPUTER

Watch the 99th ALA National Convention through our live stream at www.ALAforVeterans.org/convention, where you’ll also find an updated meeting agenda. Video can be viewed on mobile devices, tablets, or your desktop computer. Unable to catch the sessions each day? Archived video also will be available for viewing.