ALA Scholarship Recipients: Where are They Now? Jake Nikkila 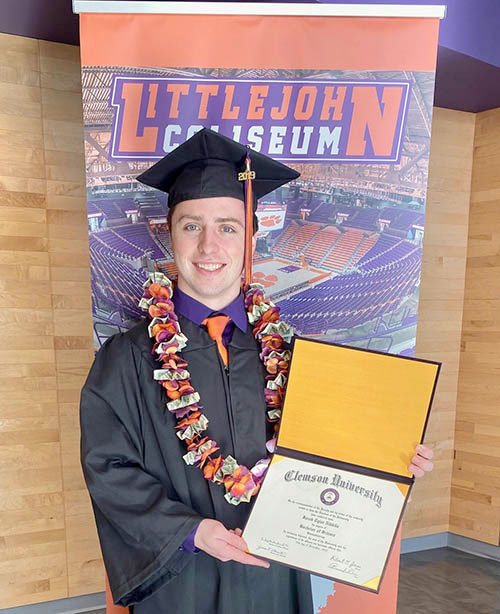 Jake Nikkila spends his days working at the U.S. Department of Defense, studying how chemicals in the body of servicemembers respond to high stress situations, in an effort to better the rehabilitation process for veterans.

Nikkila serves American heroes in a unique and instrumental way, and he had no shortage of inspiration in doing so.

His grandfather served in the U.S. Navy, and his father, still active duty, served most of Nikkila’s childhood. Though moving every few years could be seen as an obstacle for many people, Nikkila credits it with helping him become more social and adaptable, as well as teaching him important life lessons.

“I think being an Army brat really gives you a lot of perspective on life and the big picture,” Nikkila said. “Being able to learn what’s important, it’s not just about yourself but helping society and the world.”

But one obstacle Nikkila didn’t expect to face as a result of his military upbringing was paying out-of-state tuition for college. Having just moved, he didn’t qualify for in-state tuition anywhere, meaning any college he chose would be thousands of dollars more than if he had lived in the state for two years before attending.

Though this gave Nikkila more freedom in his choice of school, he knew it would come with a major price tag – that’s why he went looking for scholarships. Luckily, he had attended American Legion Boys State in high school and was given a list of scholarships he could apply.

He applied for and received the American Legion Auxiliary Children of Warriors National Presidents’ scholarship in 2015. It was the largest scholarship he received and made a sizable dent in his first year of tuition at Clemson University.

“It was such an honor to receive this scholarship,” Nikkila said. “I thought it was a long shot, but the money upfront really helped me get through.”

Nikkila graduated in December 2019 debt-free with a degree in biochemical engineering, concentrating in biomaterials and minoring in physics.

Over the years, Nikkila and his family members have received lots of support from The American Legion Family. He credits scholarships like those offered through the American Legion Auxiliary for helping him be able to follow his dreams.

“I just want to say ‘thank you’ to those who donated; that means the world to me,” Nikkila said. “It was four years of making ends meet, but I got through it, and I hope to eventually give back when I am able.”

For now, he plans to give back to our nation’s heroes through his career.

“While I didn’t choose the military route, I still chose a route in bioengineering that I can use in some way to give back to the world through research and innovation,” Nikkila said. “Scholarships like this make that happen.”

Support incredible military youth like Jake Nikkila by donating to ALA National Scholarships. You can donate online at www.ALAforVeterans.org/Donate or mail a check to ALA National Headquarters, 3450 Founders Road, Indianapolis, IN 46268 and put “ALA Scholarships” in the memo line.

Fifteen $5,000 scholarships are awarded annually (three per geographic division), to direct descendants of veterans who served in the Armed Forces during eligibility dates for membership in The American Legion.

Five $5,000 scholarships (one per geographic division) are awarded each year to ALA Junior members.

Five $2,000 scholarships are awarded (one per geographic division) to a member of the Legion Family returning to school after a break in studies.

Ten $2,500 scholarships (two per geographic division) are awarded to current college students who retained their ALA Junior membership into adulthood.

Learn more and start your application for an ALA scholarship at www.ALAforVeterans.org/Scholarships.