Hosting a Veterans Creative Arts Festival (VCAF) is no small feat – and starting a festival in a new community is even more of a challenge. 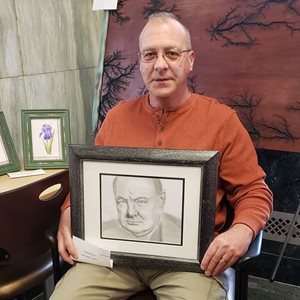 That’s why when members of the American Legion Auxiliary Department of Nebraska began their plans for their very first VCAF at the U.S. Department of Veterans Affairs Hospital in Grand Island, Neb., they knew they could not do it all on their own.

First, they worked to get the VA hospital staff on board, who helped them find space, set a time, and develop marketing strategies to enhance the program and grow participation and attendance.

“Our goal is to increase enrollment in VA services by promoting local veteran talent, as well as raise awareness of the benefits of the creative arts and its ability to heal pain and trauma,” said Angie Foster, president of ALA Nebraska District 6.

To do that, they decided to host the VCAF the same week as the VA hospital’s open house, mailed out flyers in conjunction with the open house, and posted flyers throughout the hospital and the surrounding communities.
The ALA Department of Nebraska also coordinated with other community partners who worked as judges and promoters of the event.

Despite all of the support from their community, there was still more to do to make the festival a success, so they turned to the American Legion Auxiliary Foundation and applied for a Veterans Creative Arts Festival grant. They were soon awarded $1,630, which helped cover the costs of easels, veteran recognition and awards, and a digital camera to photograph the winning entries to send to the national competition. 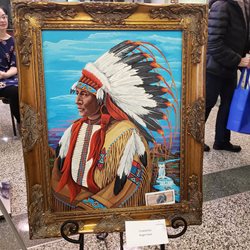 When it came down to it, the festival brought over 50 veterans together, who entered creative arts pieces in 31 different categories.

“This grant helped bring our veterans together, especially those in the rural areas of Nebraska who often feel as though they are overlooked within the VA system due to location,” said Alicia Wicht, chairperson of the Grand Island VA Creative Arts Committee. “It provided a space where veterans of similar interests and experiences could meet and share their artistic talents.”

The festival also saw an audience of over 70 people. This triumph proved the importance of art therapy and inspired the continuation and expansion of this type of program. The VA hospital is making plans to work with various nonprofit organizations to provide regular creative arts classes to empower more veterans to participate in the competition.

“The success of the Creative Arts Competition in Grand Island has spurred interest at other VA locations across Nebraska, which are considering organizing their own local competitions,” Alicia said.