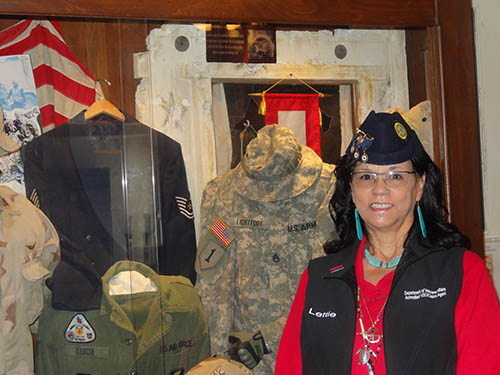 For much of her life, American Legion Auxiliary member Lettie Irons Connell has been guided by her moral compass which directs her to ways she can help others. Connell successfully pursued a career as a police officer. She spent 17 years on the force in Los Angeles County, Calif., during the Vietnam War era, working her way up to the rank of sergeant.

Coming from a family filled with military veterans and being married to Robert, a Vietnam-era U.S. Navy veteran, she later joined ALA Unit 25 in Cottonwood, Ariz., the same time her husband joined American Legion Post 25 there. Today, they belong to Post and Unit 93 in Camp Verde, Ariz., where the couple lives.

Even in retirement, Connell helps others. She aids veterans and their families by volunteering her time and talents as Post 93’s veteran service officer. This position helps veterans determine what benefits they are eligible for, and assists them in their pursuit of those benefits. Connell is also a claims agent accredited by the U.S. Department of Veterans Affairs, meaning she can work with any U.S. military veteran who asks for help or is referred to her for assistance.

Why are you so committed to being a service officer/accredited claims agent?

It’s in my blood to help people by doing paperwork and investigating to assist those who have kept us in the United States free. I learned everything I could about laws, codes, and forms. I took all the exams required to become the best advocate I could. It’s wonderful to see the faces of people when I have taken a big strain off them and they become able to help their loved ones. Veterans need to have someone to listen to them, and I am someone who cares.

Was there pushback from anyone about you, a woman and non-veteran, becoming a service officer/accredited claims agent?

Yes, and it was hard to take. But being the second woman on the police force where I worked, in 1969, wasn’t easy either. In both cases, I proved I could do the job well. You have to believe in yourself. Never let someone else’s negative words stop you.

What do you get from being an ALA member?

I experience comradery. Plus, I have the honor of meeting Blue and Gold Star parents and letting them know I care. Also, I get to help with projects that can lead to a better life for our veterans, their families, and communities. I’m able to work with others who care about our veterans and this country as much as I do.

You feel strongly about honoring and helping our nation’s veterans, and about your culture. Give an example of how those values have intersected in your life.

I am American Indian of the Lakota Sioux Tribe. My sister Victoria Irons Graves and I had a nonprofit organization, through which we escorted children from several American Indian reservations to Washington, D.C., to a cultural event held at the Smithsonian’s National Museum of the American Indian. While in D.C., we met up with some military veterans to pay tribute at the World War II Monument, Korean War Monument, and Vietnam War. This was an amazing learning event for our children, who are brought up to honor our veterans. Another example: As a veteran service officer/claims agent, I also work with veterans from the Navajo, Hopi, and Yavapai Apache reservations in Arizona.

What is the biggest life lesson you’ve learned?

We are but a nanosecond in the scheme of things in this world. Do what you can to be part of it while enjoying every moment, being true to yourself by following your moral compass, and knowing that you matter.

Learn more about becoming a service officer and/or a VA-accredited claims agent, by visiting www.legion.org/training/service-officer and va.gov.