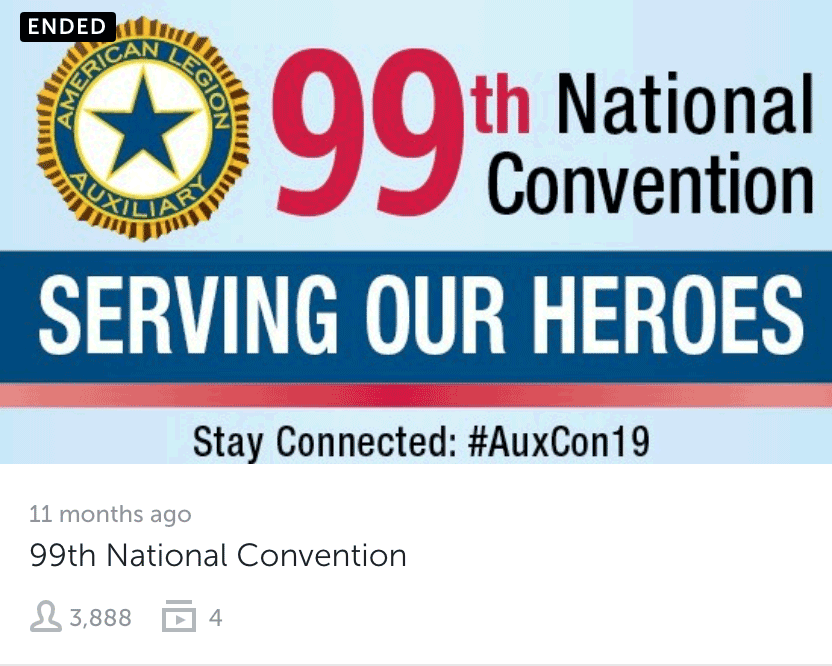 History was made at the American Legion Auxiliary’s 99th National Convention in Indianapolis! Read on to see highlights from our largest national event.

At The American Legion’s National Convention, happening at the same time as ALA’s, Legionnaires voted to replace the word “wife” with “spouse” in the organization’s constitution and bylaws section regarding the American Legion Auxiliary’s membership eligibility, opening up the doors for ALA membership to spouses of our female veterans. Currently, 1.9 million women veterans are living in the United States, and 9% of the U.S. military is female. By 2045, it’s estimated that 18% of the military will be comprised of women.

This change in eligibility has much promise for growth — leading to new resources, increased funding opportunities, and additional diversity and talent among American Legion Auxiliary leadership, as well as general membership to serve more mission activities for veterans, military, and their families.

“I can say without a doubt that the strength of our nation does not just come from the people in uniform who fight to protect our freedoms,” she said. “The spouses and families, who serve alongside them, also make tremendous sacrifices to the greater benefit of our country.”

Each year, the American Legion Auxiliary presents the Public Spirit Award which recognizes elite leaders for their contributions that positively impact our communities. We especially honor those whose efforts and contributions benefit our military, veterans, and children.

Read more about Mrs. Pence’s commitment to our veterans via the November issue of Auxiliary magazine.

American Legion Auxiliary Department of Iowa member Nicole Clapp was elected as the organization’s national president to serve during the ALA’s centennial year. Clapp’s focus as the ALA’s highest volunteer leader is on the health and wellbeing of our veterans and their families. Read more about Clapp in the November issue of Auxiliary magazine.

The National Convention body passed several amendments to national committee structure changes, which will streamline those committees and make them more efficient. This included eliminating the number of committee positions for a handful of programs, as well as eliminating a few national committees altogether. ALA departments and units are still welcome to have these committees at those levels of the organization. Contact your 2019-2020 National Executive Committeemember for further information about the structure changes.

In addition to the ALA’s Public Spirit Award presented to Second Lady Karen Pence, other national awards were part of the week at National Convention.

National Coalition for Homeless Veterans founders Robert Van Keuren, Bill Elmore, Ralph Cooper, and Michael Blecker were honored on stage during convention opening session Aug. 26. Along with U.S.VETS founder Stephen Peck, these pioneers in the advancement of veterans advocacy and care, and their mission of ending homelessness among our veterans, were part of a discussion panel titled, Look What Passion and Teamwork Can Accomplish.

“The efforts of a relatively small number of people early on have made significant strides in the lives of our veterans,” said 2018-2019 National President Kathy Dungan to convention attendees. “Listen up, influencers – imagine what 600,000 advocates can do!”

Three women were honored at the Woman of the Year luncheon this year — Leslie Lightfoot, Marsha Four, and Patricia Harris. This award recognizes outstanding women who exemplify the values and ideals of the American Legion Auxiliary, particularly those whose contributions advance the quality of life for America’s military, veterans, and their families. Read more about the women in the ALA 2019 Annual Report.

Unit Members of the Year were also recognized, showcasing those who exemplify the values and ideals of the Auxiliary and whose accomplishments impact the program work in their units. Each department selects one Unit Member of the Year.

We look forward to the 2019-2020 administrative year and the start of our second century of service to our veterans, military, and their families!